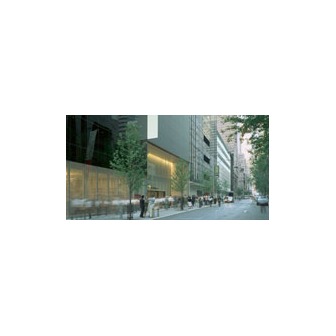 
The Museum of Modern Art is located between the fifth and sixth avenues in Midtown Manhattan. It is an important center that collects modern art ad displays it for the public. It is also noted as being one of the most influential museums of modern art in today's times. The works included in the museum are architecture, design, drawings, paintings, photography, prints, illustrated books, electronic media and sculptors.

The museum holds more than 150,000 individual pieces and 22,000 films along with more than 4 million film stills. Some of the noted collection pieces of the museum include The Starry Night by Vincent van Gogh, The Sleeping Gypsy by Henri Rousseau, Les Demoiselles d'Avignon by Pablo Picasso, Campbell's Soup Cans by Andy Warhol, Water Lilies triptych by Claude Monet, Love Song by Giorgio De Chirico, Flag by Jasper Johns, Self-Portrait With Cropped Hair by Frida Kahlo and Two Children Are Threatened by a Nightingale by Max Ernst.

The Museum of Modern Art is committed to establishing and preserving all kinds of modernistic art and documenting the manner in which modern and contemporary art has developed over the ages. They also maintain a library, archives and conservation laboratory in their efforts to do so. It has also taken upon itself to fuel and encourage creative minds in order to provide inspiration.

The museum also has a large number of volunteers. These volunteers get an opportunity of great exposure to the works of brilliant masters and they also gain an insight into the manner that the museum works in. Those who qualify to be volunteers also need to have a love of art and an appreciation for the same. They need to be flexible in order to deal with the public and have some basic skills to be able to help in research.

This mission that the founders of the Museum of Modern Art had towards the place is something that has carried down the years. The directors of the museum and the people who run the day to day operations do not lose sight of their dedication towards modern art in anything that they do.

At the heart of the Museum of Modern Art is also the desire to encourage a deeper understanding of modern art so that it can be enjoyed thoroughly by those who understand art. There is also an attempt to help people from diverse cultures, nationalities and communities appreciate the pieces of work better.

The Museum of Modern Art recognizes that contemporary and modern art started by exploring the ideals in new artistic traditions and that it really began in the late nineteenth century till date. They believe that modern art transcends national boundaries and that there can be various forms of expression of modern art including non-traditional mediums like film, architecture, nook illustrations and the web too.

The museum also believes that they need to underline the importance of modern art if they have to honor the ideals that were upheld by the artists and that this aspect has to be a central element of all associated with the work. They also believe that the continued commitment towards contemporary and modern art is something that is necessary to ensure that there is a better understanding of the manner in which it evolved.

The Museum of Modern Art was conceptualized by three patrons of art, namely Miss Lillie P. Bliss, Mrs. Cornelius J. Sullivan, and Mrs. John D. Rockefeller, Jr. in the late 1920's. The reason why the museum was conceived was because they felt a need to challenge the traditionalistic views of the current museums towards modern art. The museum was founded in 1929 and the founding director was Director, Alfred H. Barr, Jr. The idea was to allow the public to be able to understand and appreciate the visual arts of our times.

The response of the public to this new museum dedicated to modern art was extremely enthusiastic. Over the next 10 years the premises of the museum were changed three times to progressively larger ones and in 1939 the premises were shifted to the one that we know today in Midtown Manhattan. The museum was supposed to have a multi departmental structure and included one that was dedicated to architecture and design for the first time. Further expansion took place in the 1950s and 1960s under architect Philip Johnson who designed The Abby Aldrich Rockefeller Garden. Another major renovation was done in 1984 by Cesar Pelli who doubled the gallery space and added more customer friendly visitor facilities.

Today the museum has a dynamic schedule of modern and contemporary art exhibitions that span various subject matters, mediums and periods. The exhibitions are displayed in a systematic rotational manner so that there is always something new for those who like to visit the museum regularly.

The access to the bookstore allows the museum some revenue and at the same time it allows art lovers to get their hands on a variety of publications and reproductions. There is also a design store that people can visit. In keeping with their goal of furthering the knowledge of modern art, the museum also has an educational program that is dedicated to providing information and learning with regards to modern art.