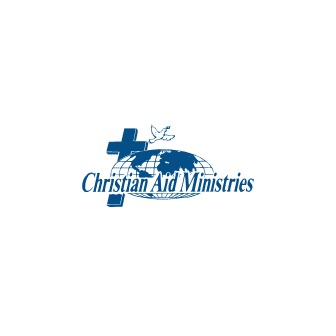 
Christian Aid Ministries is primarily a volunteer organization, except for the management and supervisory staff and bookkeeping functions. Volunteers donate about 200,000 hours of work every year at its warehouse, field bases, disaster response services and other locations. To accomplish its aim of spreading the Gospel and set a Christian example, it organizes relief programs for the deprived and penniless, and adds spiritual and physical significance in the lives of people during economic hardships, war and natural calamities. Most of its programs revolve around material aid to Christians and non-Christians.

Headquartered in Berlin, Ohio, Christian Aid Ministries (CAM) has a 55,000 square feet center in Ephrata, Pennsylvania where relief shipments, including food parcels are packed and organized. Next to the warehouse is a meat canning facility. CAM also has five clothing centers in Iowa, Indiana, Illinois, Pennsylvania and Ontario (Canada). All clothing, fabric, comforters and footwear are received in these clothing centers and packed for shipment overseas. Outside USA, CAM has a presence and distribution centers in Israel, Ukraine, Romania, Liberia, Moldova, Haiti and Nicaragua. Its wide network allows it to reach out to people in need in USA and wherever needed across the globe.

Christian Aid Ministries is a not-for-profit organization. Contributions to the organization are tax deductible to the extent permitted by law. It falls under the ambit of relief and development charities and enjoys a 5-star rating in financial efficiency. According to the last submitted financial statements, the total revenue of CAM was in the region of $1.86 million, expenses $1.36 million with net assets of $94, 285,000.

Christian Aid Ministries strives to peg its expenses at 1% percent of revenue, which includes cash and donations in kind. CAM is particular about transparency and ensures that its financial statements are regular mailed to its entire mailing list.

Christian Aid Ministries strives to be a channel for channel for Mennonite, Amish, other conservative Anabaptist groups and individuals to minister to spiritual and physical needs around the world. This is in response to the command, ". . . do good unto all men, especially unto them who are of the household of faith." (Gal. 6:10)

Christian Aid Ministries' relief programs reach out to needy people around the world with the aim of providing material aid to people, regardless of their faith and religion, during times of hardships; be it due to drought, epidemic, war, storms and other natural disasters, along with sharing the message of the Gospel of Jesus Christ.

Christian Aid Ministries' main purpose, as per its own admission, is to provide aid to help and encourage God's people and to help bring the Gospel to the lost and dying world. Its ultimate purpose is to enlarge the Kingdom of God.

In times of natural calamities, Christian Aid Ministries' rapid response teams of volunteers gear up and get ready to provide help to victims. Regardless of whether it is in USA or outside and no matter if is a food crisis in Africa, Cholera epidemic in Haiti or Tsunami in Japan CAM's volunteers start a campaign for collecting donations.

True to its stated mission, in 2004, CAM supplied 551,342 Bibles, New Testament, Bible story books and translated teaching books to thousands of people in search of inner calm. At the same time, CAM does not wait for calamities to occur but remains steadfast to its declared mission of extending material aid to the needy wherever and whenever. In the same year it also supplied 1,900,000 hot meals for school children in Haiti, 87,298 food parcels to needy people in Romania, Moldova, Ukraine, other former Soviet Republics, Haiti, Nicaragua, and Liberia.

Christian Aid Ministries (CAM) was founded in 1981 as a channel for Amish and conservative Mennonite churches, for the specific purpose of catering to the spiritual and material needs of needy people across the globe. Despite its short history of 30 years, it distributes around 15 million pounds of food, medicines, clothing, seeds and Christian literature annually in different countries particularly Romania, Moldova, Haiti, Ukraine and Liberia.

At present, it has 19 monthly sponsorship programs. Prices range from as low as $25 to $100 a month. One may even choose to support specific families or entire areas. Its response teams are always eager to help victims whenever there are warnings of storms anywhere in USA.

One of the longest running relief programs of CAM relates to the famine in Africa where young Somali children are dying while their parents flee across the border to overcrowded camps Ethiopia and Kenya, where trucks haul water to drought stricken areas but the poor are unable to pay and where desperate people travel five to six days to find water sources for livestock.

In an area where the hunger crisis is fast getting out of control, CAM has a team on the ground to research the needs of the drought stricken population and find ways to join other groups to organize assistance with food and development projects.

CAM has also played an active role during the March 2011 tsunami crisis in Japan, the fifth largest earthquake ever recorded and worst in the history of Japan. It sent its team to Japan to coordinate its relief efforts on the ground. Less than 2% of Japan's population is Christian. As it is with its other international relief programs, it gave priority to sharing the Gospel of Jesus Christ, along with extending emergency care to victims. CAM was present in Haiti, running a clinic, during the January 2011 Cholera epidemic.