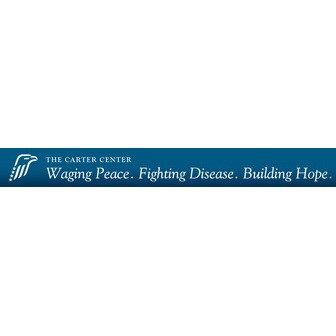 
The Carter Center is a non-profit origination that was founded by former U. S. President Jimmy Carter and his wife Rosalyn Carter in 1982. It is a non-governmental body that was opened in partnership with the Emory University to strengthen human rights and to bring an end to human suffering. Located in Atlanta in Freedom Parkway the organization has worked in more than 70 countries.

Carter Center is managed and governed by a board of trustees. This board monitors and manages the assets and property of the center and gives direction to the manner in which the assets should be utilized in order to further the goals and objectives of the organization. There is also a board of councilors that includes members from the public and private sector. These people support the Carter Center in the various organizations that they manage too. The daily activities of the center are monitored by the president and CEO of the center; something that includes managing a staff of more than 175 people. Some of these are experts in the field of peace, health and human rights and these sometimes include Presidents and Prime Ministers of the Americas, the International Task Force for Disease Eradication, the International Council for Conflict Resolution and the Mental Health Task Force.

There are various ways in which one can donate small sums of money by crediting it to their account, opt for tribute gifts, legacy options and more. However, money is not the only contribution that one can give; one can also give valuable time to this center by taking part in some of the initiatives.

Jimmy Carter believes that "Ultimately, the work of the Carter Center is about helping people achieve better opportunities and watching hope take root where it languished before". The center basically believes that all humans have some basic rights that need to be upheld at all times and that all kind of human suffering should be reduced. It also believes that all kind of conflicts need to be resolved amicably in order to enhance freedom and democracy so that everyone can live peacefully and healthily.

There are five principles that the Carter Center has and these are the guiding forces behind the work that the center does. While specific programs change over time, depending on the need of the times, these guiding principles help the center in focusing on what programs to take on.

The center believes that the focus should always be on action and results and just efforts do not justify the existence of programs. They believe in careful research and analysis and to then take timely action where required. Another guiding principle of the center is to avoid taking on issues that other organizations are focusing on in order to avoid conflict and confusion. In addition to that the center knows that all efforts cannot result in complete success. The possibility of a failure is recognized and accepted, albeit not in all circumstances.

When tackling issues related to conflicts the center always ensures that they take a nonpartisan stand and that they remain neutral during conflict resolution at all times. One of the most important guiding principles involves the belief that all people have the capability of improving their lives when they are given the opportunity, skills, knowledge and resources to do so. With these as the guiding principles of the center, the Carter Center is set on tackling some of the pressing issues that we face in the world today.

The Carter Center was founded by former U. S. President Jimmy Carter and his wife Rosalyn Carter in 1982. This Atlanta based center has helped in improving the lives of people in more than 70 countries. Along with the Emory University, the center looks at advancing human right and reducing the unnecessary suffering that some of our brothers have to experience. The center was dedicated in 1986 and William Foege was appointed as the executive director.

During the 1990s, the Carter Center received millions of dollars as donations to fight the Guinea worm disease and to prevent blindness. The center has achieved various milestones since its inception. It has been able to strengthen the international standards for human rights and allowed many people to voice their concerns about human rights across the world. It has done a lot in the area of mental health and ensured that those affected by various maladies are taken care of adequately and not shunned by society. The center has also been a mediator in various kinds of disputes that have taken place over the years. These have been on national and international levels.

In 2000, the 16th annual Rosalyn Carter Symposium on Mental Health Policy was conducted. It was also the year when the Liberia office was closed after providing years of service in order to advance peace, human rights and democracy. The center was called upon to observe elections in Venezuela and Mexico too. They were present to observe the Peru elections too, however the center withdrew since conditions were not fair. In 2001, the center initiated talks with China in order to encourage elections for local officials in villages. In 2002, Mrs. Rosalyn Carter was inducted into the National Women's Hall of Fame in Seneca Falls in New York. Over the years, there are many other significant achievements that the center has been able to accomplish.